After we finished up at Mark’s Kiwi fruit and Apple farm we were back on the bus and on our way to the next farm. This farm was an all organic vegetable and blueberry farm that belonged to the Lawson family and was run by Scott Lawson. The property is located on some of the newest and most fertile soils on the plain; you can almost draw a line in the dirt where it goes from gravel to this rich fertile soil. Apparently these gravel soils were once home to sheep at really low stocking rates before it was discovered that you could grow NZ’s red wines in them.

In the vineyards there was an array of wind turbines, at first I thought that they were there for power generation but we were soon told that they for frost protection. In a normal frost they use the turbines to stir up the warm inversion layer above the crop and use it to keep the vines warm; however in a polar frost where there is no inversion layer using the turbines would probably just make the effect of the frost worst.

The Sign on the driveway read “Lawson’s True Earth Organics” which was their brand and is proudly displayed on all their produce. As the bus trundled up the driveway we noticed that while a few of the fields were all in Lucerne while the others divided up into rows that were only a few metres across. We learnt later that this type on intensive strip cropping was to increase diversity in his fields in order to avoid the creation of a large monoculture, while the fields filled with Lucerne were being spelled and the Lucerne was there to build up the soil, add nitrogen and act as a cover crop.

As we got off the bus we were handed our packed lunches and ran for the cover of the packing shed as the sky’s opened up again. Scott started to give us the run down on the organic farm; they grow a range of vegetables including Pumpkins, Carrots, Potatoes, Onions as well as Blueberry’s and Lucerne hay (while we were there they had pumpkin’s, carrots and onions in the packing shed). Making for a diverse and busy operation. 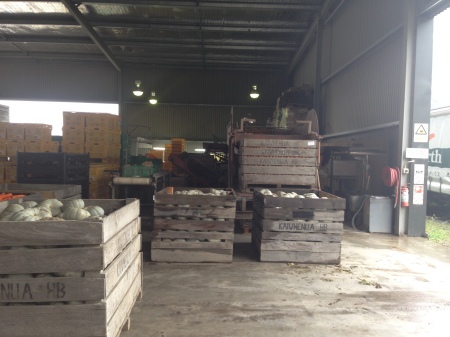 Scott said that while the farm is organic they still apply almost anything they need for soil health and pest control as long as they get it from a certified organic source, which it more difficult and expensive to do (eg. Blood and Bone as a natural fertiliser). While selling an organic product does attract a premium the inputs such as fertiliser and seed (organic seed is bought when possible but untreated seed can also be bought) also cost more so there is little gain in cost margins.

The best way to save money is to limit inputs and the best way to limit inputs is to maintain excellent soil health. One of the ways he achieves this is that all his machinery runs on auto steer so his wheels always run in the same tracks and will only create compaction in those tracks. As I mentioned earlier the other thing he does is he spells fields for 2-3 years and grows Lucerne in them while they are being spelled. As Lucerne is a legume it adds nitrogen to the soil which helps to increase the soil fertility, the other method he uses is when he is not cutting the Lucerne for sale he will cut it and mulch it back into the soil to build up organic matter in the soil.

Aside from vegetables Blueberries also play a large role in his operation. So in a brief gap in the rain we walked over to where they grow Blueberries to take a look and listen to Scott explain how they grew their Blueberries.

To increase the growing season he grows two varieties of Blueberry one that has a picking season of October through to December and the other had a picking season of January through to May. Throughout this the Blueberries are picked by hand every two weeks and taken to the packing shed. At the packing shed each berry is individually inspected by hand to make sure it has the right colour and firmness before they’re packed into a punnet and labelled with the “True Earth” label. 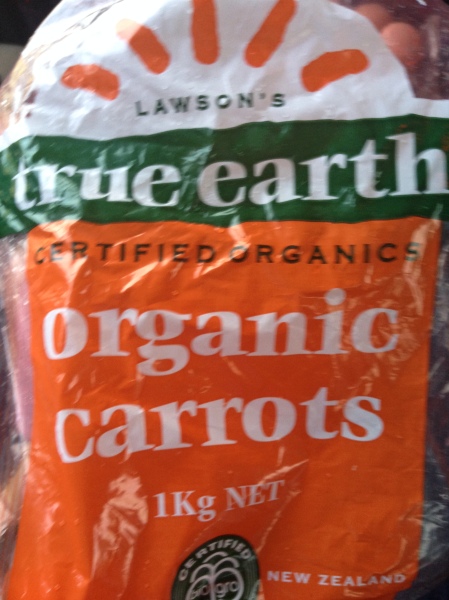 The blueberries are irrigated from dripper lines that run about 30cm off the ground, irrigation is critical to the blueberries as they only have short fibrous roots unlike other plants. Scott like all the farmers we visited on the tour uses ‘Hydro Services” to monitor soil moisture and determine their irrigation schedule. Drip irrigation was the preferred choice for the blueberries as it is more efficient than sprinklers and won’t trigger the berries to burst. From what I understood of what we were told rain or an excessive amount of water on the berries can cause them to split and burst open. 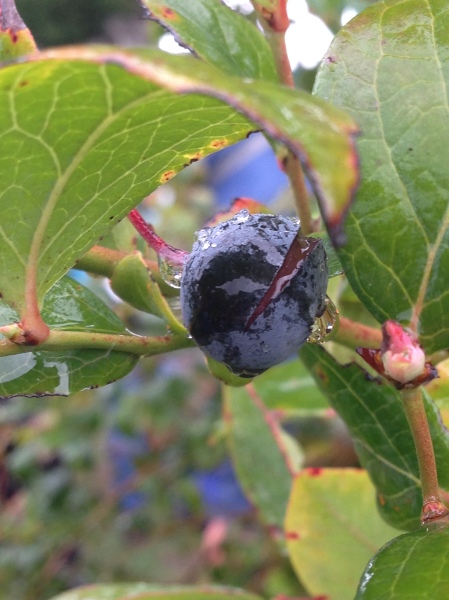 Frost was again the main worry in the Blueberries and like the Kiwi Fruit farm they used sprinklers for frost protection.  He also has lights set up around his property that turn on automatically when the conditions are right for a frost, to warn to turn the frost protection system on. The other main problem that they have in the Blueberries is damage from birds; however this problem drops off significantly once the grape vines start fruiting. While obvious solution to keep the birds out is to put up netting over the berries it is very expensive and has to be weighed up against the loss of production (A recently planted section of blueberries has been netted). While he didn’t know exactly how much damage the birds did he did say the believed it was probably greater than realised, but having just heard some advice a few days before he was going to put out water for them so they wouldn’t have to get moisture from his berries.’ 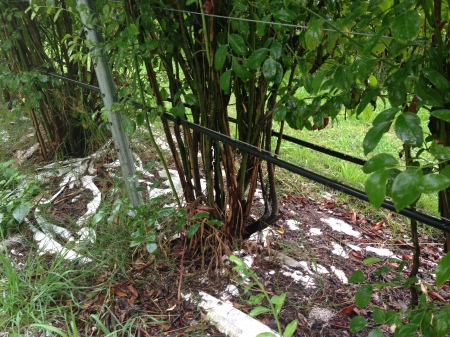 Soon enough the sky’s opened up again and pressed for time we got on the bus and headed off for the next farm. Where we looked at Mike’s dam, his property and how he was leasing part it to “Constellation Wines” to grow their grapes. So keep watching this space for the next part in the NZ farm tour. 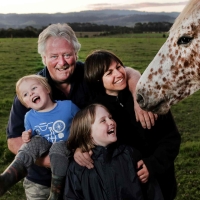 Picture You in Agriculture Chat

The world needs creative, innovative and courageous young people who can connect, collaborate and act. We know that youth may only be 20% of the population but they are 100% of the future. The time is now to let them share their dreams and design the future they want to see.

A blog about Australian dairy farming

The Sights Of The Farming World

Be inspired to travel Australia

the adventures and misadventures of an ag college student and beyond!

Working together towards Indonesia's better future

Stories of food, farming and people

Producing food & caring for the environment.

How a Watermelon and Cattle Farm works

Grow Yourself A Future